Jackson and I left the Valero in Wolfforth at 7:50 AM and headed toward Brownfield. We thought we would be four, but work jumped up and bit two of the group. We turned west on US 82/ US 380 through Plains, veered left at Plains and went to Lovington, NM. We stopped and got some gas just to get my butt off the seat for a little bit. The ride so far had been delightful, not much wind, pleasant temps, the sun at our back, and not much traffic.

The ride to Artesia, still on US 82, was just as nice. There has been construction around Loco Hills for two or three years and has really slowed us down on our rides to Cloudcroft. But this year the construction was almost completed with no one around (including LEOs) to slow us down. Traffic was still light and scattered. We cruised through Artesia and headed on west. Tall clouds were beginning to build in the west before us, looking rather ominous. At NM 24 (I call it the Dunken cutoff) we turned off US 82 and rode south on NM 24. We had not gone far when we came to a low water crossing that was rather full of debris from high, fast moving water and was still wet. We had to tiptoe our way through all that rock and mud. It had been several years since I had been down NM 24, and I remembered it as being in rather bad shape. But so far the surface was in good shape. And best of all, no traffic and no animals on the road. We continued to Pinon and the road started rising at a good rate. The altimeter on my GPS was showing a fast rise as we climbed into the mountains. Still no traffic or animals to be seen. Lovely. We flashed by the turnoff to Weed before we realized it but chose to keep going and not disturb our rhythm. We would find out the next day the Weed Café is still closed. We reached NM 130 and took a little break at a pull-off; we had met 10 cars in the whole distance from Dunken to the intersection of NM 24 and NM130. The road surface was good the whole way. To the west, the clouds were getting taller and darker. It was clear that we were going to get wet before we reached Cloudcroft.

We went four or five miles down Cox Canyon before it started sprinkling on us. The rain was never heavy, but it was steady all the way into Cloudcroft. Since it was only 11:15 MDT, we knew it was too early to get in our rooms at the Dusty Boots Motel, so we elected to go to the Western Bar and Grill for lunch. We were able to find a parking spot across the street and back into it. As it was still raining lightly, we tried to cover our gear as much as possible and headed in.

During a leisurely lunch, the rain would get heavier and then slack off. When we came back out to the bikes the rain had passed on by and we rode down to the motel. Naturally, our rooms were not ready, so we sat out in the newly emerged sunlight and talked about our excellent ride through the mountains. After about an hour and a half, we were able to put our things in a room. We went back downtown and bought a six pack apiece and came back to sitting out in the sun until time for dinner at the motel restaurant. We had just ordered our meal when Mike Brown walked in. It seems that he left work at 2:00 PM and rode over. After our meal we resumed sitting outside and talking (parking lot rally). After a couple of beers sipped slowly and a lot of talk, we retired for the night.

After breakfast in the motel restaurant the next morning, we suited up and gassed up and got on the Sunspot road, then had an excellent 16 miles of scenic road south to the solar observatory, which turned out to be closed. After a slight pause we rode on down toward Timberon on another scenic road. We stopped at the Apple Tree turnout for some pictures before continuing. 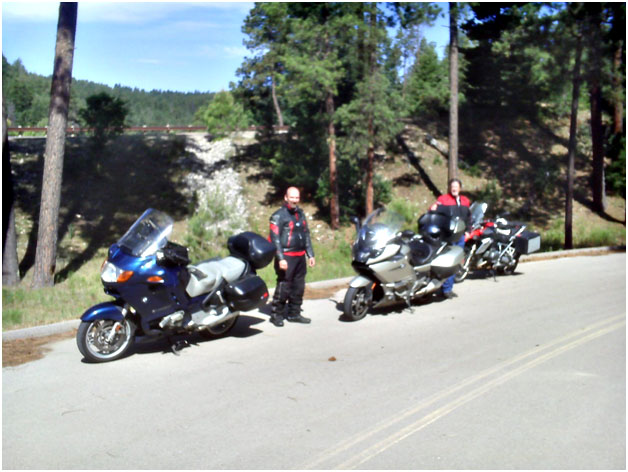 After the picture session, we had a spirited ride to Timberon, all the way to the T intersection and left to the Lodge. The Lodge wasn’t open so we turned around and headed back.

Side note: You can ride from Timberon east to Pinon, but you would need a dual purpose bike and some dirt riding experience to do it. The road follows along the Sacramento River all the way.

On the way out (one way in and out), we stopped at Bug Scuffle (the intersection of Timberon Rd and the West Side Rd) for some pictures. Don’t know about the name. There is a ranch not too far down the West Side Rd by that name.

Another side note: the West Side Rd goes south from the intersection around the southern end of the mountain range and then north to High Rolls, NM, which is about halfway down the mountain from Cloudcroft. The road is not paved and you would need a dual purpose bike to ride it. I have been told that on a clear day, you can see Franklin Mountain in El Paso. I’ve never seen the air around El Paso that clear.

After the picture session at Bug Scuffle, we traveled on to the Sun Spot Rd and then on north to NM 130 and on down through Cox Canyon to Weed to see if the Café was open. As stated earlier, it was not. A shame; they had good food and eating there nearly always made it rain on us. So we had a spirited ride to Mayhill for lunch the the Café there. Also pretty good food. They were following the 50% rule, so not many could get in at a time.

After the meal we rode west on US 82 toward Cloudcroft. At NM 244 we turned northeast to ride through the Apache Indian Reservation. Just before the ninety degree turn about halfway to US 70, it started raining lightly on us. But after the turn, we had not gone more than a couple of hundred yards before it quit. When we reached US 70, we turned left and headed toward Tularosa and on south to Alamogordo. At the intersection of US 82 and US 54, we turned right on the new truck by-pass around Alamogordo until we once again rode on US 70 toward White Sands. At the Mayhill lunch stop, as we were getting ready to leave, Mike mentioned that he would like to go to White Sands to get some pictures. Shrug, fine with me. Only Jackson did not hear that exchange. As we were riding along headed southwest, he had not a clue where we were going and was getting more and more puzzled. About halfway to the Sands, he rode up beside me and gave the spread hands gesture meaning, “What the hell?” I just shrugged and pointed ahead to the Sands. Of course, the Sands were closed with a couple of Park police there in the parking lot to enforce the closure. We had a laugh about what had transpired, while dodging cars that pulled off the highway wanting to get in also. (Later, at the motel, Mike explained that he had been taking pictures and getting his book stamped from National Parks all over the U.S.) We headed back toward Alamogordo, stopped for gas, and headed back up the mountain to Cloudcroft, which is a very nice ride.

More parking lot rallying until it was time to eat. It was VERY crowded in Cloudcroft, so we decided to, once again, eat at the motel restaurant. Except, for me, the wait was much too long (I do not do lines very well). I ate some of my granola bars that I always have with me and drank a beer in a chair in front of my room. I also had a Louis Lamour book that I read while sitting there. After Mike and Jackson had eaten, more parking lot rallying broke out until about 9:30 or so. Nice and cool, not much wind, aaaahhhh!

We left the next morning for home. Mike took the long way. He went down the mountain, went up to Socorro, and then on NM 246 back to Roswell. Jackson and I just headed east on US  82 toward Artesia, Lovington, Plains, Brownfield, and Lubbock. We arrived back in Lubbock about 12:30 PM.

We had a very nice three-day weekend in the high mountains of New Mexico (Cloudcroft is at 8,700 feet elevation and a lot of what we rode is above 9,000 feet). It was really pretty and green and cool. Dusty and his wife are doing a good job of updating the motel. We have a club outing scheduled there in August, so load up and go with us.