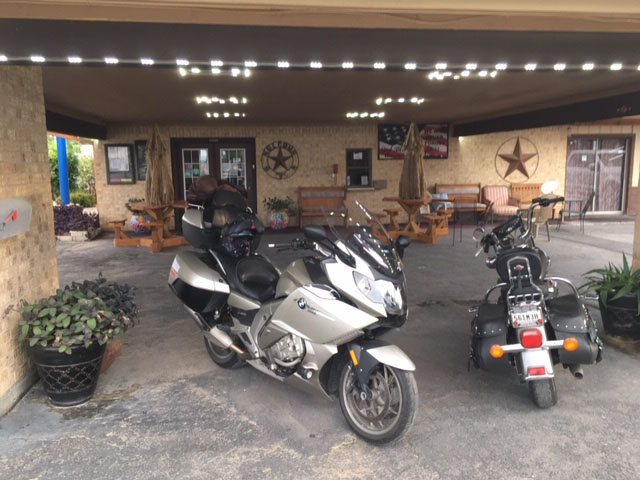 Jackson, Darrell, and Calum’s Memorial trip to Angel Fire fell through with the New Mexico’s Governor’s edict that no out-of-staters could rent a place to stay in New Mexico until further notice. Since they had Thursday and Friday off, they would just go somewhere in Texas. So… Junction it was. Darrell’s friend Rex Keese in Lufkin, who was kind of footloose since the airlines weren’t exactly busy (he is a pilot for Delta), was invited along and I (John Summers) invited myself along.

Darrell, Jackson, and I left the Stripes on US 84 and MLK at 7:45 on Thursday morning and headed southeast on US 84. The temperature was cool, the sky was clear, and I was glad I had put my liner in my mesh jacket. We motored down US 84 to Sweetwater and turned south on Tx 70 to Tx 153, which we followed to Winters. We gassed up at a relatively new gas stop/convenience store and turned south on US 83 to Ballinger and on to Eden, Menard, and Junction. We arrived in Junction at 12:15 and went straight to the Legends Inn where Calum was just getting off his bike. He had ridden over from the Leander area. We all were assigned a room on the south side, dumped our stuff, and headed back down the street to Lum’s BBQ for lunch. After a good lunch of various kinds of BBQ, we went back to the Legends to spend the rest of the afternoon sitting under the portico with our favorite adult beverages, catching up with Calum, and waiting for Rex to show up. Jim Compton from Midland showed later in the afternoon in his new-to-him VW Golf (read hot rod little car). He sat with us and helped out with the conversation. Rex showed much later (he had a lot more miles to go than we did). We ate dinner that night at La Familia, just down the street, and entertained the owner and the waitress with BS and general conversation. Back at the Legends, we continued with the parking lot rally until after dark. We all parked our bikes under some cover because the weather guys were saying there was a good probability of rain that night.

My night was filled with leg and foot cramps and not much sleep. I was awakened at 7:45 with a pounding on my door (we were supposed to leave on our ride at 8:00). They were ready to go, and I was still in my PJs. I told them to go on and I would catch them. After some snickering, they left and I proceeded to get ready. (Compton went another direction in his car.) I had to get gas, so I stopped at the food market on Main St (multiple gas pumps). As I was putting gas in the bike, a pickup stopped on the other side of the pumps and a short guy with a big droopy mustache stepped to my side and asked if I had my bike blessed this year. I said no. He was CMA and said he would be glad to bless my bike. OooKaayy. So he laid his hand on the clutch reservoir and proceeded to pray for the bike and its owner. He prayed about removing obstacles from my path, for the machinery to keep functioning as it was supposed to, and for the owner to stay alert and healthy, and he gave me a sticker I could put on the bike. I thanked him, buttoned everything up, and left.

As I was riding down US 377, I was feeling bulletproof. The bike and I had been prayed over, and obstacles had been removed (even the Highway Patrol?). Hammer down. I didn’t see more than a handful of vehicles all the way down to Tx 41 and on down Tx 335 to Camp Wood, Leakey, Vanderpool, and almost to Utopia. It was eerie, riding along by myself, seeing no critters, no cars, no people anywhere. Within a couple of miles of Utopia, I saw some cars and felt better. Then I saw the group just getting off their bikes on the side of the Lost Maples Café. I had caught them!

As it was still early, there were not many people in the Café, and we got our choice of pie. Jim and Howard would have been proud of us! We had a good, long, leisurely lunch and headed back to the north to 337 and turned east to Medina. At Medina we stopped at the Apple Store so I could get some cinnamon-apple ice cream and the rest of the group tried to sync to Senas. They had a model 10, a 20, and a 30. Apparently, it was a bitch to get them all synced. I could have had two or three cups of ice cream while they were doing this. I was the only one who didn’t have such a device, so I wasn’t involved. 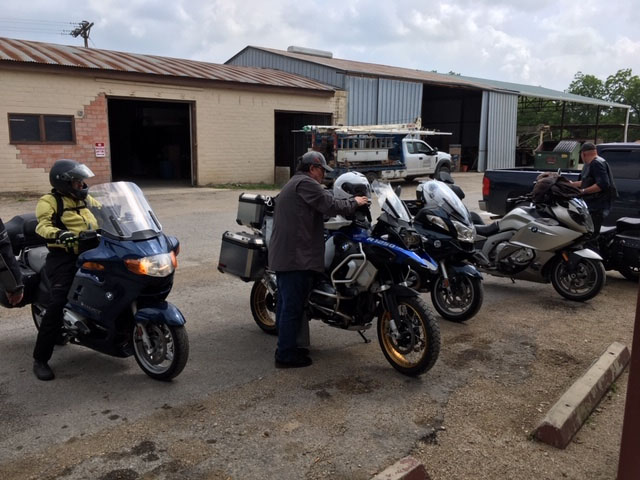 They either gave up or succeeded, and we proceeded north on Tx 16 to the south side of Kerrville. We got on Loop 98 around the south and southwest sides of Kerrville and rode to Tx 27 and then to Mountain Home and connected to IH 10. We rode down IH 10 to Junction at 80 mph. Kind of nice to do that legally. Rode to the motel and had a little cool off period in the rooms.

After dinner, we had another parking lot rally. We found out that Jim had gone over around Fredericksburg and drove the Willow City Loop among other things. We stayed with the rally longer than the night before, probably because it was cooler. We talked a lot about airplanes since we had a commercial airline pilot in our midst. The weather guys promised more rain, so we put our bikes undercover again.

Again, no rain. But… this morning I was up and ready to go. Jim decided he would go on back to Midland. The rest of us retraced our steps back down 377 to 41, but this time we drove past 335 and rode on East to 336 (that other twisted sister). Good riding until we hit light mist, then light rain, which made the road rather slick. Rex needed gas when we got Leakey, so we went to the big new station/store/western junk place just south of 337. Then we got on 337 and went east again to Vanderpool and on to Medina. I looked longingly at the Apple Store as we drove by on the way to Bandera. A short stop in Bandera to decide where to eat lunch and decided to go to the Alamo Springs Café near the old railroad tunnel on the Old San Antonio Road. The problem was, I forgot how to get to the old S.A. road in Comfort. I rode around in circles for a bit, got very upset with myself before I figured out how to do this. I really enjoy the old S.A. road; you can’t really go very fast on most of the road as it is very curvy and a lot of ups and downs and water crossings. After a very nice ride to the old tunnel, we made a right-hand turn, and there it was. It started out as a small hippy, dippy joint (there used to be a commune nearby, don’t know if it is still there or not), and turned into a larger outside dining establishment. They only have three tables inside, but they have tables and chairs sitting outside under shade trees and umbrellas. The hamburgers are big and juicy and good.

After the meal, we rode north to the intersection of the old road and 290. A left turn at Friendship Lane took us over to Tx 16. We chose to go straight on Tx 2093 which curves around to Harper. At Harper, Darrell and Rex decided to go on 290 to the Interstate (10); the other three turned north on Tx 385 and rode north to US 377. From there it was a short ride back to Junction. At this point, it was getting rather hot and sticky, and we were ready for an air-conditioned room.

After a cool-down and a nap in our rooms, we decided to walk to Lum’s for some more BBQ (Rex had never eaten at Lum’s). After a really good meal, we waddled back to the Legends for another parking lot rally. This night was looking like the weather boys were going to be correct. It started sprinkling and blowing rain on us, so we gave it up and went into our rooms. It rained lightly for a couple of hours but nothing heavy.

Calum and Rex had planned to leave at 7:00 on Sunday morning, but by 7:30 they were still there in the parking lot. Jackson, Darrell, and I were ready to go, so we all left together. Calum and Rex split off on 377 and headed east, and the three us headed north on 83. We came back our usual way through Ballenger, turned off on 2111 to 153 toward Sweetwater. When we got to the wind turbine farms, Darrell and I hit the mother of all potholes (somehow Jackson missed it – he would say because of skill). I hit it so hard my radar detector flew off my dash and I grabbed it with a desperate grab (it was Velcroed down). Just up the road, off to the side, was a bright yellow, newish Corvette. It looked dead in the water, so to speak. He broke something and couldn’t go on.

We stopped at Love’s Truck Center and filled with gas and took a little breather. We made it home without further incident.

We had a good trip despite the afternoon heat. The mornings were cloudy and cool, and the heat and humidity didn’t kick in until the middle of the afternoon. My odometer showed a little less than 1100 miles for a four-day ride.