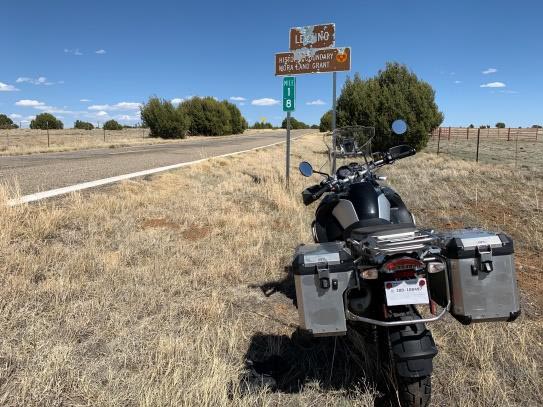 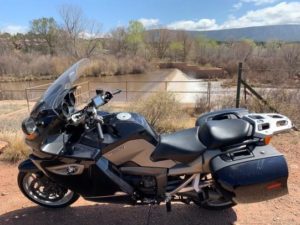 I left Lubbock around 7:00 to make it to Santa Fe motorcycle shop by 1:00. Traffic was light, as in Christmas on a Sunday light all the way to I-40. I stopped in Fort Sumner for gas and a breakfast burrito, I should have went with the biscuit. There was only one person wearing a mask, she was a millennial who drove up by herself. I would guess the truck traffic is heavier but the car traffic was still light. I turned off on State highway 3 north to Villanueva, if you have not made it down this road, you went the wrong way. Traffic actually picked up on this road and when I started south on I-25, I saw the second motorcycle followed by a Spyder. I checked into the hotel that is walking distance to the BMW dealership. The mechanic works at night only to separate him from the rest of the lepers. The showroom is closed and nothing else to do but walk back to the hotel and watch TV, pizza delivery.

The next morning was disappointing, I had asked them to replace the quick disconnect on the fuel pump that I had replaced 40k miles ago. The shop forgot to order it, so I took the new from under my seat and 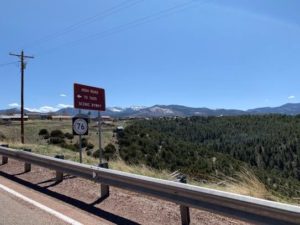 the mechanic said both the original fitting and the new one leaked. So they would provide me a loaner R1200RT to get me home, it went click, click, click. The battery was down so they had a 12’ R1200GSA. I left the shop, hopped on the NM599 bypass and got behind four riders from Albuquerque (I think). They stopped at the casino (all closed) gas station and I asked where they were headed. The R1200RS said he was not sure, I took this as four is company and five is a crowd. I headed north on US 84 by myself and took NM503 through Cundiyo, Axle really likes this road to NM 76. Then the usual route to Taos, NM75 and NM518 with a lot of LEO presence. Just as I get to Rancho De Taos, I see one of the Albq riders turning onto NM518. 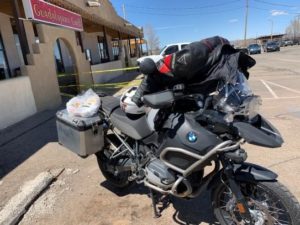 I stopped at Guadalajara Grill for lunch, it looked like an ER behind the counter, everyone had a blue mask on. I placed my order and they carried it out to the bike for me. US 64 to Angle Fire and hang a right for one of my favorites, Coyote Creek road and it is in really good shape. I have figured out that I much prefer Michelin tires over the Continentals that are on the GSA. Just south of Guadalupita, the view of the mountains is supurb. I top off the tank in Mora at the Alsups where it is standing room only outside to get through the five limit only door. A little south of Rasberry Ranch is NM 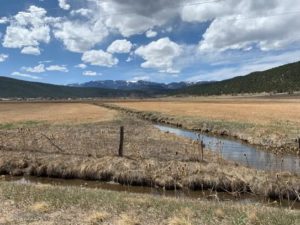 161 to Golondrinas and onto I-25. The road has tight twisty, big sweepers and a few good views of Hermits Peak. I had a pit stop at marker 18 since I didn’t want to stand in line at Alsups. The funny think about the shot-up sign in this picture, half of the target practice was from the opposite side. I stopped at Love’s in Las Vegas for a Gatorade, it was pretty crowded but no one had to stand outside. I turn east on NM 104 toward Tucumcari but just past Trementina, I pick up NM 419 to Mosquero. There are a few homes out there that have been practicing social distancing for quite some time. You can pretty much pick your speed after Mosquero but the sheriff was paying attention as you go into Logan. The rest of the trip was uneventful, it was nice to have something different than the same ol same ol. I rode 500 miles Saturday, no velocity awards. I carried a mask Kim made for me but only wore it once. Other than not being able to have a sit down meal, travelling on the bike is still pretty much the same. I really like the fuel capacity of the GSA! . 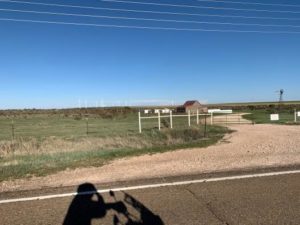