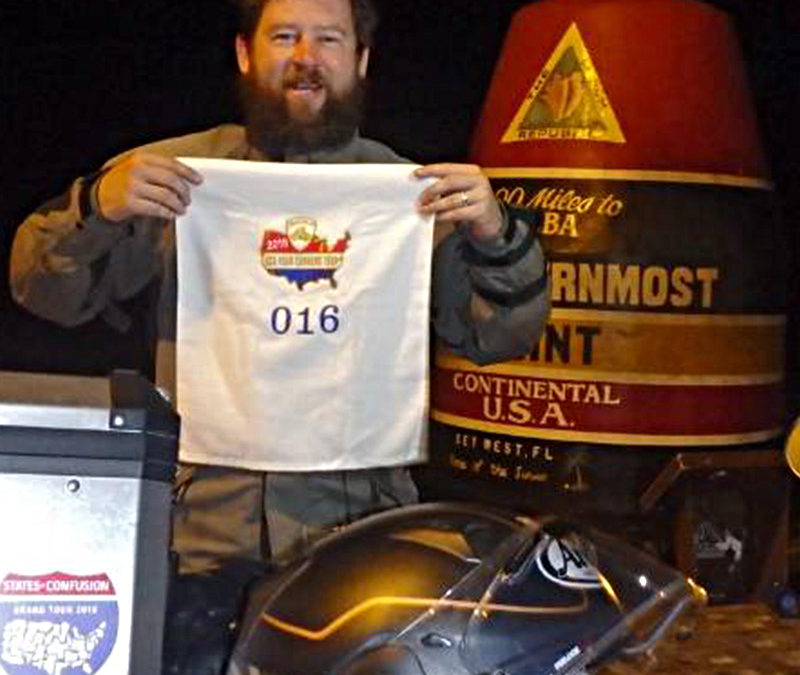 Overview:
The East Coast 2000 is an Iron Butt Association certified ride between Key West, Florida and Madawaska, Maine. The 2,100+ miles need to be completed in under 48 hours and can be done in either direction. Part of the challenge of this ride is avoiding congestion delays in the Florida Keys, and in Washington D.C., New York City, and Boston, which are along the shortest route.
I completed the ride from Key West to Madawaska in under 36 hours. It was the final leg of my SCMA Four Corners Tour which had started 15 days before in Blaine, Washington.

Ride Report:
After an excruciatingly slow ride south of Florida City, I arrived in Key West, Florida early on Wednesday evening. I rode first to the Southernmost Point marker on Whitehead Street for a photo with my Four Corners flag. There were people lined up for over a block waiting their turn to take a picture with the buoy. Although there was nobody selling tickets or preventing line cutters, I decided to keep my distance from the Snapchatting tourists and parked the GSA across the street for a distance picture with my flag. The picture wouldn’t be frame-worthy but would serve as documentation for the Four Corners. I then bought gas nearby to check the Dated Business Receipt (DBR) at the pump for accurate information in preparation for my morning departure (business address, date and time).
I then rode back to the northern end of Key West and checked into my hotel for the night. The Hilton Garden Inn is located at the first major intersection the Overseas Highway meets in Key West. It worked well being away from the bars along the southern end, and the price was reasonable. I refilled my on-bike water and snacks, had a lite dinner, and was in bed before dark.

Leaving the hotel Thursday morning about 3:20 AM, I rode back to the Southernmost Point marker to try for a better picture before starting the ride clock. The crowd of tourists was gone and other than two teenagers sitting against the buoy in salty ocean spray the place was deserted. The guys were obviously worried when I pulled up on a bike with extra lights and reflective gear, and they got up as soon as I parked along the curb. I assured them I was just needing a photo (wasn’t a cop), and the least stoned of the two offered to take the photo for me. After showing him what button to push on my rally camera, and posing with my flag in front of the marker (and listening to him talk about how iPhones take better pictures than cameras), he captured a better photo than I’d been able to get the evening before. I then quickly returned to the gas station for a DBR to start the clock (stamped 03:53) and headed north.